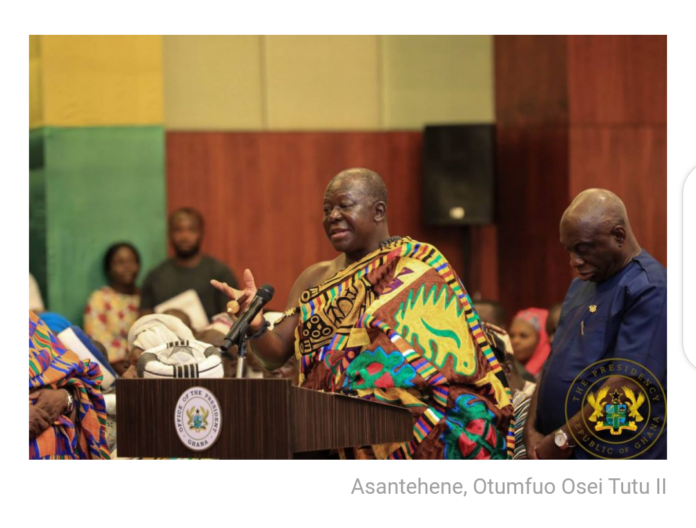 Two Civil Society groups, Alliance for Social Equity and Public Accountability (ASEPA) and IMANI Africa have petitioned Asantehene Otumfuo Osei Tutu II to call on the Electoral Commission to rescind its decision to compile a new voters’ register for the 2020 general elections.

Representatives of the two groups finished a closed-door meeting with the Asanteman Council in Kumasi today, Monday, June 1, 2020.

Speaking after the meeting, President of IMANI Africa, Franklin Cudjoe told the media that the Asantehene was waiting to officially hear from the EC on the matter.

“Justifiably, Asanteman decides that they will also listen to the EC and then they will see which advise they can offer, which I think is fair,” Mr. Cudjoe stated.

He further reiterated some concerns his think tank has had with the EC’s posture.

“The procurement process that led to the purchase of this new equipment [for the new voter register] was fraught with a lot of irregularities.”

Mr. Cudjoe also insisted that there were no strong questions about the integrity of the current register because “the EC has never once suggested that the register is bloated.”

IMANI Africa has in the past noted that the EC wants to rip out a voter management system worth $60 million, of which value at least $40 million has accumulated since just 2016, and spend $150 million (plus contingency) constructing a new one.

According to the think tank, a careful analysis of best practice in procuring biometric technology for elections in Africa shows that the EC’s proposed spending plans are inflated by about 60 percent.

“In short, the EC’s proposed system is brutally expensive compared to other countries in Africa. The EC’s claims about the existing system’s weaknesses are flawed and untrue because the biometric data can be salvaged and facial recognition technology already exists through visual inspection,” IMANI argued in a statement.

The tensions over the register have led the National Democratic Congress (NDC) accusing the governing New Patriotic Party (NPP) of conniving with the EC and the National Identification Authority(NIA) to rig the 2020 elections.

Nonetheless, the EC is still expected to begin the voter registration exercise later in June 2020.

The EC wants to ensure that the register that is used on the election day is more credible and efficient than the existing one hence the need for a new Biometric Voter Management System (BVMS).