Kojo Oppong Nkrumah has been rejected by the Minority as Minister-designate for information.

The 13 members of the minority on Parliament’s Appointment Committee have voted against the approval of 3 of the President’s ministerial nominees.

The minority has also caused the deferment of a decision on five of the nominees.

Due to the equal numbers held by the majority and the minority which has reflected on the committee, the minority’s position equates to an outright lack of consensus on the affected nominees.

Check This Out:The Queen’s Commonwealth Essay Competition 2021 Has Been Launched

Here are the reasons:

a) The Minister-designate for Information was not the least candid with the
committee on the multiple infractions of the law leading to the Bank of Ghana’s
revocation of the license of Oval Microfinance – a company in which he was 83%
majority shareholder.

b) He failed to admit ethical liability for the related party lending between Oval
Microfinance and West Brownstone which also belongs to him. He also denied
outstanding obligations to Oval Microfinance despite the BoG’s examination
report establishing the contrary.

Check This Out: FULL TEXT: Why Minority deferred 5, rejected 3 of President’s ministerial nominees

c) He peddled untruths under oath about the circumstances leading to investigative
journalist Manasseh Azure relocating to South Africa with the assistance of the
Media Foundation for West Africa when the journalist faced threats to his life.

d) The nominee was quite evasive on his association with MX24 TV which is owned
and managed by his wife with other family members such as Kwabena Oppong
Nkrumah serving as shareholder/Trustee for the parent company of MX24 TV
known as Black Volta Publications Limited incorporated recently on the 4th of April,
2017 when the nominee was serving as Deputy Minister for Information. 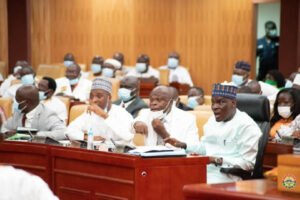