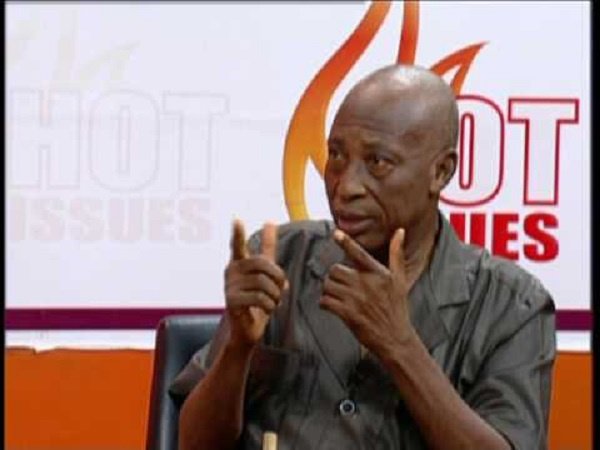 A member of the 1979 Revolution, Osahene Kwadwo Boakye-Djan, has defended comments he is accused of making against the Electoral Commission, Ghana (EC).

He said he is not part of the “class of people” who deny making statements attributed to them.

Speaking on TV3’s Hot Issues on Thursday, May 21, the retired army officer said he made the statement out of his experience as an intelligence officer with several years of experience in the army.

The retired senior army officer was picked up on Tuesday, May 19 by officials of the Criminal Investigations Department (CID) of the Ghana Police Service but was later granted bail.

He is also to report at the Berekum Divisional Police Command every Tuesday.

Major (rtd) Boakye-Djan is said to have stated that the country would be plunged into civil war if the EC is allowed to have its way in the preparation towards the December 7 elections.

Speaking to host Johnnie Hughes, a popular architect of the June 4, 1979 revolution said he has been in government and his words should not be taken lightly.

He said his experience with elections in Ghana dates as far back as 1951 and the posture of the current Chair of the Commission portends trouble for the country.

The failed National Democratic Congress (NDC) parliamentary aspirant said he made the comments after a former Jaman South Constituency Youth Organiser of the New Patriotic Party (NPP) went on a local radio station to gloat that his party will extend the margin of victory over the NDC by 300,000 – from the 2016 results – if a new register is compiled by the EC.

He said he found this a cause for worry and discerned the election figures may have been cooked already, then.

Little wonder, he surmised, the EC seems to be dancing to the tune of the appointing agencies.

“If you have a situation where the Electoral Commissioner will be justifying cleaning up [and] that the current [register] is bloated, there is a conflict of interest,” he said, pointing out that that stance is against not only the NDC but civil society as well as smaller political parties.

He said Jean Mensa is “beating war drums” by her actions.

“If you want to run against the track and the direction and interest of the people, then you are pushing us into a national conflict role. And that is all I am saying and as a soldier who is in possession of arms for almost 20 years, I can detect a drift towards civil war and it is my responsibility to make knowledge of this available to Ghanaians so that we can avoid it.”