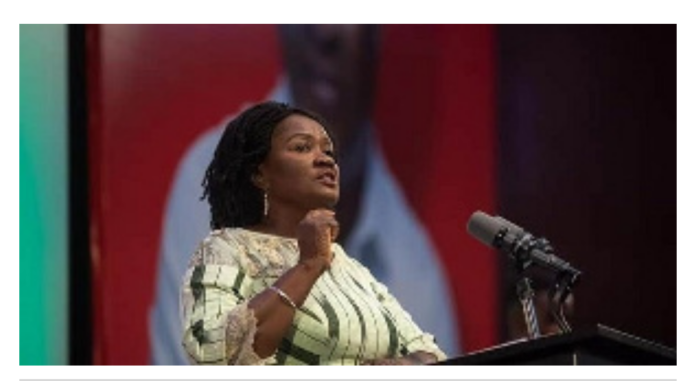 Professor Jane Naana Opoku-Agyemang, the Running Mate to NDC Flagbearer John Mahama in the 2020 elections, has been entangled in an embarrassing web of mistrust after editing and endorsing “Working with Rawlings,” a book which has sparked confusion within the ranks of the opposition National Democratic Congress (NDC).

Authored by party elder and former Minister, Professor Kwamena Ahwoi, the book has made startling claims about former President Rawlings, as well as revealed a well-orchestrated scheme which involved some young, but key NDC activists to launch vernal attacks on Rawlings.

While the former President himself and NDC Volta Regional Council of Elders Chairman, Daniel Abodakpi have launched scathing attacks on the author, Kwamena Ahwoi, for his claims in the book, three other former Ministers and young NDC activists mentioned in the book as having been trained to “talk back at Rawlings” during his public feud with late President Mills, have all publicly discredited the book’s account.

Prof. Jane Naana’s role in the making of the book

With the raging public war of words on-going over the authenticity of the book’s account, one big area of interest is the striking endorsement of the book by NDC Running Mate Prof. Jane Naana Opoku Agyemang, as well as her key role in the making of the book, which has irked many Rawlings loyalists and other NDC stalwarts.

Apart from being credited with editing the book, Prof. Naana Opoku Agyemang actually describes the books general narrative in glowing terms in the foreword which she wrote.

The foreword, an important element of a book, is normally reserved for close associates of the author who have had an

exclusive and privileged insight about the book.

Despite the book irking Rawlings and many accounts being maligned and discredited by party gurus, Prof. Jane Opoku-Agyemang describes the book as “an account honestly delivered,” in her foreword, which is normally written when the book is all set for production.

“Written in clear, engaging prose, the writer invites the reader to receive the content of the narrative as an account honestly delivered,” Prof. Jane wrote so fondly in the foreword.

While some persons mentioned in the book such as Dr. Omane Boamah, Felix Kwakye Ofosu and Samuel Okudzeto Ablakwa have vehemently rejected the book’s account as false, the NDC Running Mate curiously wrote that the author narrated events “with open honesty and transparency.”

Check This Out:  Kweku Baako shares perspective on squeezing of ‘Bede Ziedeng’s balls’

She added: “the first person narrative perspective releases the reader from the potentially uncomfortable position of an intruder to that of a trusted addressee. This is especially so as the text grounds its content in verifiable fact, at times seeking and receiving the approval of non-fictive persons.”

Contradictions and raging war of words

Prof. Naana Jane Opoku Agyemang’s emphatic endorsement of “Working with Rawlings” is in sharp contrast to the views of her party’s founder, Jerry Rawlings, party elder Dan Abodakpi as well as three key members of the NDC who have bared their teeth to the author.

The Chairman of the Volta Regional Council of Elders of the NDC, Dan Abodakpi was the first to dispute claims in the book, describing the publication as “wholly inaccurate or patently false,” as well as “slanderous and treacherous.”

The NDC Elder suggested the book was an attempt to discredit the political legacy of former President Rawlings, adding that Rawlings “does not deserve this from people like Prof. Kwamena Ahwoi.”

Indeed, Dan Abodakpi warned that Professor Ahwoi and those supporting the publication of the book will be resisted.

“Prof. Ahwoi and thise supporting the slanderous and treacherous book are served notice that any attempt to misrepresent the facts behind the tru story of the Revolution and the NDC party to our people will be fiercely resisted,” Aboadakpi said in a press statement.

Rawlings himself has reacted furiously to claims in the book and he has threatened to deal with the “callous agenda of bile from the likes of Kwamena Ahwoi.”

Indeed, many have wondered why Prof. Naana Jane would edit and endorse a book which appears to cast her party’s founder, Jerry Rawlings in bad light, as well as exposes deep secrets within her party.

She may have been involved in the work of the book before her nomination as running mate of John Mahama, but many have interpreted her starring role in the makibg of the book as a sign of her closeness with the Ahwoi’s, and thus part of the grand anti-Rawlings, and perhaps anti volta scheme in the NDC.