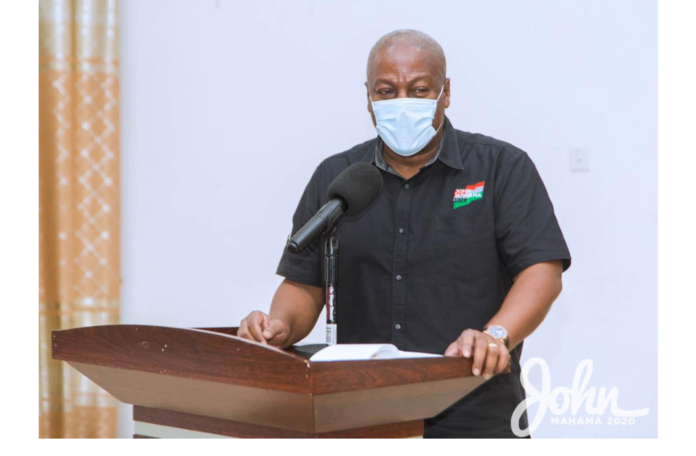 Former President John Dramani Mahama has promised to construct a new regional hospital and a university in the Oti Region when re-elected as president.

The candidate for the opposition National Democratic Congress (NDC), who said this when he paid a courtesy call on the Chiefs of Kwamekrom in the Oti Region declared, not only would he construct a new hospital and university but district hospitals.

According to him, all districts in the region will get district hospitals and polyclinics including Kwamekrom.

Mr. Mahama further promised to repair all deplorable roads in the region if re-elected, adding the NDC is the only party with an unprecedented record of infrastructure.

He told the chiefs and a large crowd that the majority of electrification projects, hospitals and other projects across the country were all initiated under the NDC.

He appealed to the residents to come out in their numbers and participate in the upcoming voter exhibition exercise so they can vote massively for the NDC come December 7, 2020.

He described as encouraging the number of persons who participated in the mass registration exercise.

He added that the NDC would emerge victorious should the general polls be organized in a transparent, credible, free and fair manner.

Meanwhile, he has admonished voters not to allow the NPP to influence them with money and other material things to retain them in power.

Another four years for the NPP he suggested would mean more economic hardship, corruption, mismanagement and incompetence.

“When they come to you with money, take it and spend it but on the day of the election, apply some wisdom and think about the future of your children. When you do that, there is no other party you will vote for aside from the NDC,’’ he stated.