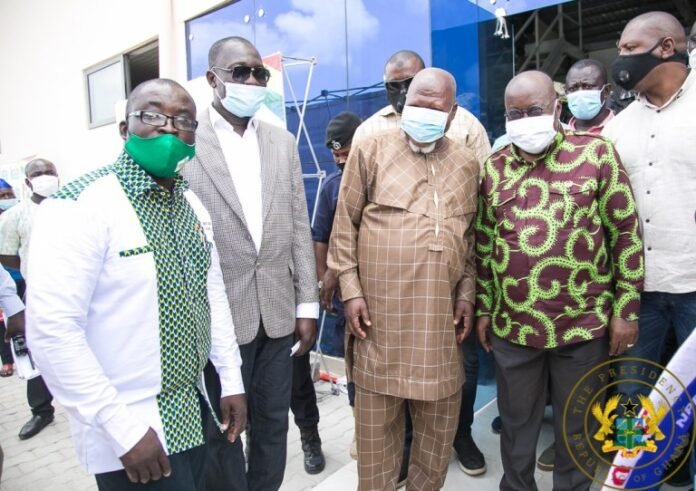 On Friday, 21st August 2020, the President commissioned the Ekumfi Fruits and Juices Factory, an initiative of Government’s 1-District-1-Factory programme.

The $15 million factory is the first factory ever to be established in Ekumfi and has created some 1,550 direct and indirect jobs.

The Ekumfi Fruits and Juices Factory has been well-planned and well-thought-through, with the raw materials needed for the successful operation of this project already present, and an out-grower scheme in place.

At the event to Commission the much-touted Ekumfi Juice Factory, the embattled Allotey Jacobs was seen in a pose with the President of Ghana, Nana Addo Dankwa Akufo-Addo.

Check This Out: You’re going too far, enough! – Tracey Boakye turns heat on Captain Smart over ‘papa no’ video

Allotey Jacobs is currently suspended by the National Democratic Congress (NDC) for engaging in what the party says is against its constitution but was spotted at the event which has left many tongues wagging.

The John Evans Atta Mills proponent has said that he will actively join the NDC in 2021 when the founder has taken over his political party but for now, prefers to be a social commentator