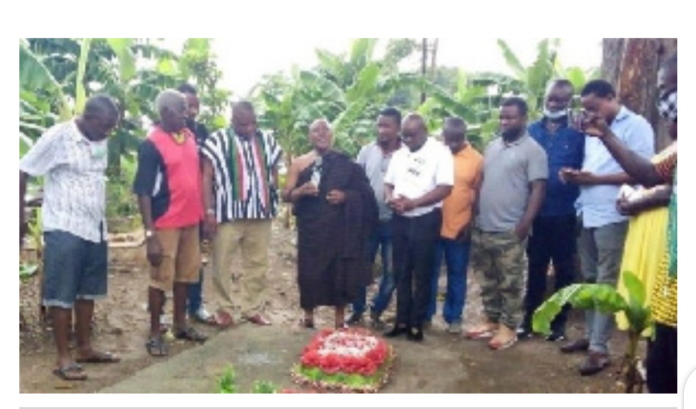 A Chief of Breman in the Suame Constituency in Kumasi, Baffuor Kotei Kutin Sraman, has caused a stir by offering special prayers at a cemetery for the flag bearer of the opposition National Democratic Congress (NDC), ex-President John Dramani Mahama.

The traditional leader particularly prayed to the ancestors of Breman, which is one of the known traditional towns in Asanteman, to help Mr. Mahama to win the 2020 polls.

His weird behaviour of deciding to offer special prayers for the NDC flag bearer at a cemetery is reported to have incurred the wrath of his people.

Scores of the youth at Breman are reported to have become extremely angry over the bizarre actions of their chief so they have vowed to report him to the Asantehene, Otumfuo Osei Tutu II.

According to sources, the NDC Parliamentary Candidate for Suame, Francis Dodovi, on Thursday June 10, 2020 visited the Bremanhene at his palace at Breman in the morning.

That fateful day marked the 28th anniversary of the formation of the NDC; therefore, Dodovi had reportedly visited the traditional leader to solicit for his prayers for the progress of the party.

Unexpectedly, instead of praying for Dodovi in his palace, the Breman chief rather suggested that Dodovi and his supporters should follow him to the Breman Cemetery for special prayers.

Baffuor Kutin Sraman, who was holding schnapps, reportedly prayed to his ancestors to stand behind Mr. Mahama so that he emerges victorious in the upcoming elections.

According to the Bremanhene, Ghana experienced massive transformation when Mr. Mahama was President for a term; therefore, the NDC leader deserves another term to do more.

Baffuor Kutin Sraman took his time to recount the developmental projects of Mr. Mahama and stressed the need for the Breman gods and ancestors to help him win the polls.

When DAILY GUIDE interviewed Dodovi on phone, he confirmed that the Bremanhene indeed prayed for Mr. Mahama at the cemetery and said he was grateful to the chief.

According to him, indeed Ghana experienced massive transformation when Mr. Mahama was in political office; therefore, the chief had not erred for praying for the NDC flag bearer to win the polls.

In a related development, a section of the youth at Breman are said to be brimming with rage after it emerged that their chief had decided to pray at a cemetery for the NDC leader to win the next elections.

The Breman youth said they would report their chief to the Overlord of Asanteman, Otumfuo Osei Tutu II, to punish him.

“It is not in good taste for our chief to march NDC members to our cemetery for special prayers for Mr. Mahama to win the polls so we shall report him to the Asantehene,” they said.

The Asante Kingdom’s royal mausoleum is located at Breman so Otumfuo periodically visits the town. The youth have said they will lodge their complaint to Otumfuo anytime he visits Breman