The State, through the Ghana Police Service, has charged 20 Minority MPs with unlawful assembly after they marched to the head office of the Electoral Commission in Accra on Tuesday, 22 December 2020.

Apart from them, the police also charged Mr Peter Boamah Otokunor, a deputy General Secretary of the main opposition National Democratic Congress with the same offence.

The police has taken issue with them for failing to pre-inform the law enforcement body ahead of the march.

A statement of offence said the MPs unlawfully assembled and conducted themselves in “a manner likely to cause persons in the neighbourhood reasonable fear where a breach of the peace is likely to be occasioned.”

There was a near-violent standoff between the Minority Caucus in Parliament and about 100 heavily armed riot police officers on the day of the march, as the lawmakers tried forcing their way into the headquarters of the Electoral Commission, which is about a kilometre from the Office of Parliament, to present their petition to the election management body concerning the election results declared for the Techiman South constituency after the recently-held general elections.

The MPs were mostly clad in black and kept daring the armed police officers to “shoot us” and “kill us”.

The police said the MPs needed to have served notice of their protest in accordance with the Public Order Act but the MPs said they were just taking a walk.

The protest march by the Minority Caucus followed several pockets of demonstration across the country by members of the main opposition National Democratic Congress (NDC) against the Electoral Commission and its management, who they have accused of stealing victory for the incumbent.

Both the NDC and NPP have 137 seats in Parliament. There is one independent MP, who has sided with the NPP, from which he had run solo in the recent polls. 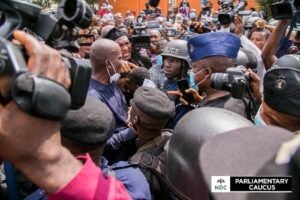