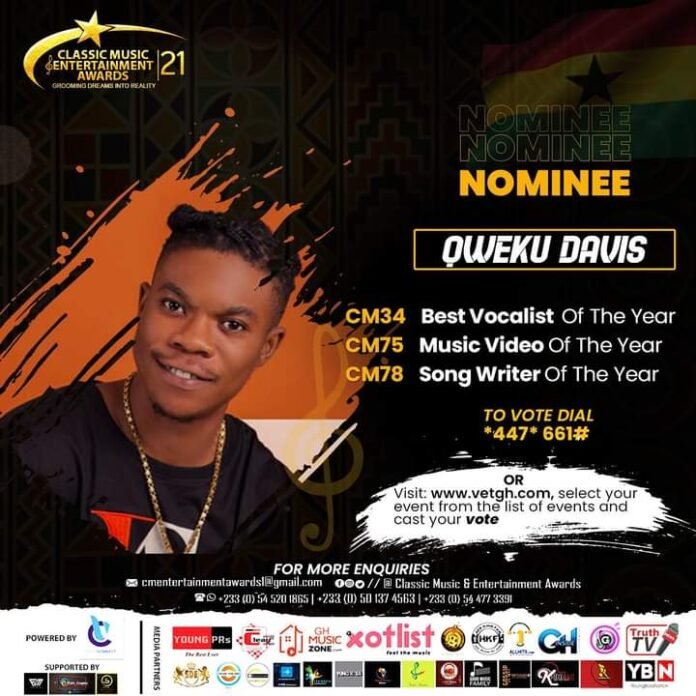 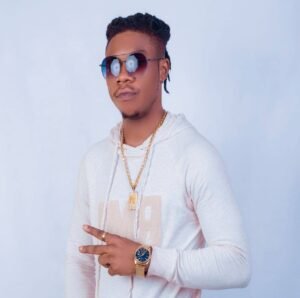 Qweku Davis Gains Three Nominations At Classic Music Entertainment Awards 21. Music lovers will say for a fact that Qweku Davis formerly Wavy Davis entered the music industry with great tenacity and has never given up on his zeal to entertain the general public with good tunes.

He broke out of the egg shell after he was featured on Sherifa Gunu’s song “Susu Pon“. He thrilled music lovers with the Dancehall twist that he did on the song even though he is a singer. He then released his single “Mee Wu” featuring Abochi, “My Bestie” hitmaker.

He went ahead to feature the recent VGMA Reggae/ Dancehall Artiste of the Year; Ras Kuku on his second song “Fine Girl”. In December 2020, he decided to release “Fakye” to settle cases among lovers to have a beautiful and enjoyable Christmas holiday. 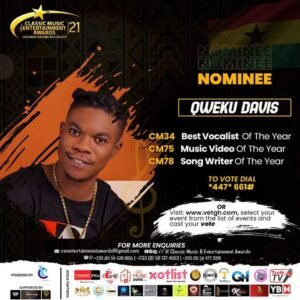 These and more he has been doing behind the scenes caused many to nominate him for an award in the Classic Music Entertainment Award 21 (CMEA 21). He has been nominated in three categories:
CM34: Best Vocalist of the Year
CM75: Music Video of the Year
CM78: Song Writer of the Year

Qweku Davis now calls on all his friends, loved ones, fans and music lovers to vote for him to win these awards.

“I have about ten (10) songs recorded which I’m working on the videos one after the other, I am really preparing to make Ghanaians very proud because I’m hoping to push Ghanaian music globally. If I’m voted for to win these awards, it will boost me to do extra work to release hit upon hit songs to entertain ourselves“. He said. 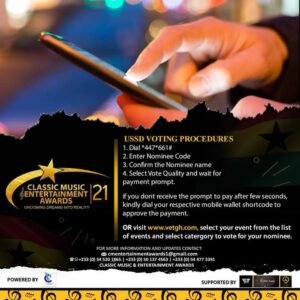 CMEA group have provided the voting criteria for all. If you believe Qweku Davis is good, he will be much grateful if voted for. CMEA group aims at celebrating Urban Music Entertainment and Personalities, Stars and also projecting them to mainstream.