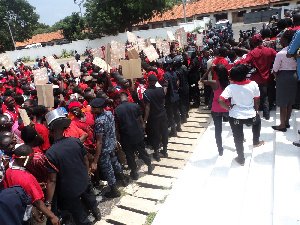 Chief and residents of Akyem Abuakwa, Kotoku and Bosome, all in the Eastern Region, have served notice of a mammoth demonstration against the flagbearer of the opposition National Democratic Congress (NDC), John Dramani Mahama.

The demonstration is scheduled for Wednesday, September 9, 2020.

Protesters have been asked in a notice sighted by GhanaWeb to gather at Asamankese Lorry Park.

John Mahama recently shared a comment by MP for Bolgatanga Central, Isaac Adongo, in which he sought to say that an “Akyem Sakawa Mafia” in government initiated the controversial Agyapa Royalties deal to rob the state.

“Agyapa Royalties fraud is the last straw: The Akyem sakawa boys and grandpas must go,” was the headline of the original post that was also shared by Mr Mahama.

Since Mr Mahama shared the post, it has been condemned as ethnocentric against the people of Akyem Abuakwa.

The announcement about the demonstration gave the following explanation:

“Protest against bigotry comments made against the chiefs and people of Akyem Abuakwa, Bosome and Kotoku by the flagbearer and leader of the National Democratic Congress, John Dramani Mahama.” 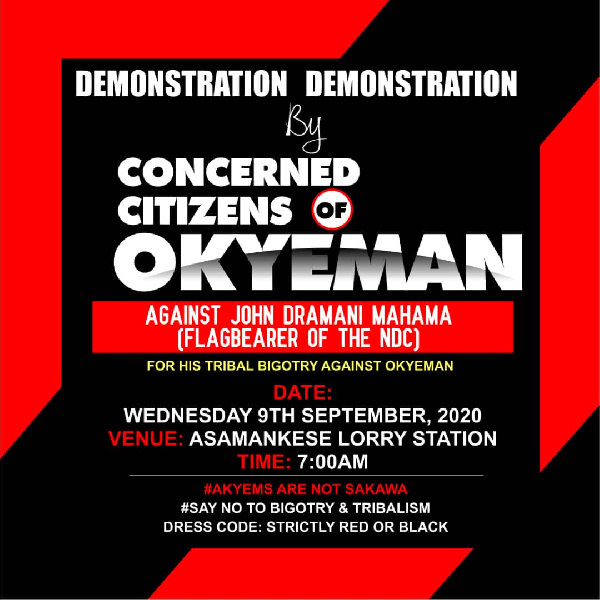 Meanwhile, the NDC has said it will not apologise on behalf of John Mahama for the comment.

The Deputy General-Secretary of the NDC, Peter Boamah Otokunor, has said members of the ruling New Patriotic Party (NPP) have taken the words out of context.