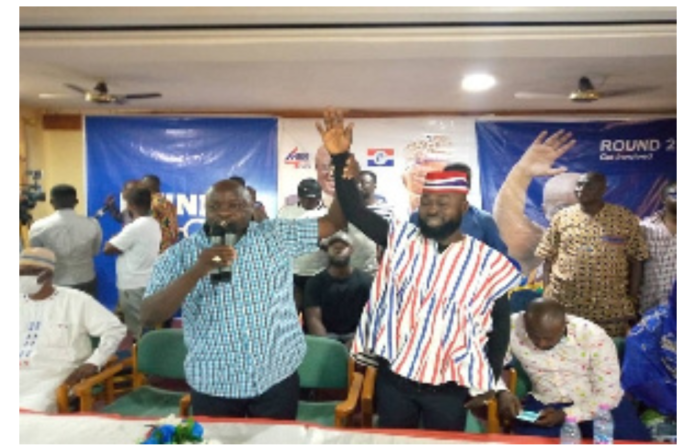 A known member of the opposition National Democratic Congress (NDC) in the Asawase Constituency in the Ashanti Region, Murtala Mohammed, has defected to the New Patriotic Party (NPP).

Prince Akuta, as he is affectionately known, announced his decision at a press conference on Thursday, September 17 which was heavily attended by the rank and file of the NPP at the Asawase enclave.

Murtala said his decision to cross carpet to campaign for the ruling party is motivated by the track record of the Akufo-Addo-led administration, especially in the Zongo Communities.

Citing the successes chalked during Hajj pilgrimage and the payment of Arabic tutors by the government, Murtala believes, a second term for the Akufo-Addo government could improve the lives of members of the Muslim community In Ghana.

“I am with full conviction that if Ghanaians renew the mandate of President Nana Addo Dankwa Akufo-Addo, NPP will be better placed for everyone. I urged especially my Zongo sisters and brothers to work hard to ensure continuity of this administration for the betterment of the entire Ghanaian people”, he said.

The Asawase seat is one of three constituencies in the Ashanti Region occupied by the NDC in the ruling party stronghold.

Akuta, with his youthful exuberance, played a pivotal role in the 2016 elections as he campaigned massively for the sitting MP, Muntaka Mubarak.

In an interesting twist, however, the man who was elected a branch executive of the NDC at Aboabo campaigned vigorously for one Masawudu Mubarick — Muntaka’s only contender.

The decision to contest the Minority Chief Whip was shot down by the party sparking widespread agitation among the youth.

Prince Akuta, who is widely known on social platforms, has pledged to snatch the seat from the NDC.

Municipal Chief Executive for Asokore Mampong and Parliamentary candidate for Asawase, Alidu Seidu on his part, described the move as welcoming and timely.

“In 2016 I remember during our mini rallies, night rallies, one day we were at Asawase, by the time I got to Aboabo Number One, Akuta was there with his team, campaigning. When we left there, before I got to Adukrom Bola, he was there organizing another programme. So, I saw him as one of the guys who can torment our ways of doing things and our campaign, and he did the same thing.

“So on the basis of that, I know what he can do. So, if today he has joined us, we are more than excited to welcome him. That was why I called on him to put in the efforts he put when he was with the NDC in this our campaign, because like I said earlier, Asawase is now or never. With him, I strongly believe that our chances will be much brighter than before,” Alidu Seidu told the media.

He called on party members to embrace the new entrant as the party braces with time to win all 47 seats in the Ashanti region. Political parties have often been hit with mass defections in election years.

A deputy communications officer for the NDC Zongo Caucus, Awal Mohammed also joined the NPP prior to the 2016 polls. He is currently the Public Relations Officer for the Youth Employment Authority (YEA).