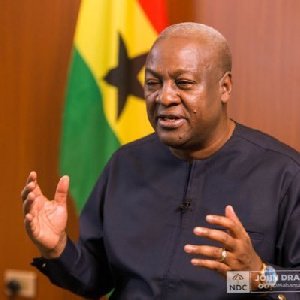 The presidential candidate of the National Democratic Congress (NDC) in the 2020 general elections, John Dramani Mahama ‘has filed a motion praying the Supreme Court to allow him to amend the writ he filed to challenge the validity of the Declaration of President-Elect by the Electoral Commission.

Mahama in the motion for amendment is praying the court to correct an error or a “mistake” in the election petition.

Check This Out: Nana Addo is only a watchman at the presidency – NDC

The mistake, as stated in the motion was in relief (f) of the election petition.

The election petition, filed on December 30, 2020, to challenge the outcome of the 2020 election results, interchanged the first Respondent, namely the Electoral Commission (EC) with the second Respondent, namely Nana Addo Dankwa Akufo-Addo, in several places.

The motion reads that during the pre-trial conference, Counsel for and on behalf of the petitioner shall seek leave of the Court to amend his petition as follows:

“(a) By reversing the position and designation of the parties under paragraph (6) of the writ filed on 30/12/2020 by amending paragraph (f) of the reliefs……repeated in paragraph 35(f) of the petition by replacing ‘1st Respondent’ in the second and third lines with ‘2nd Respondent’ to read as follows: ‘(f) An order of mandatory injunction directing the 1st Respondent to proceed [and] conduct a second election with petitioner and 2nd Respondent as the candidates as required under Articles 63(4) and (5) of the Constitution.’”

Meanwhile, the Supreme Court is expected to hear the motion for amendment on Thursday, January 14. The case will end by February 10.