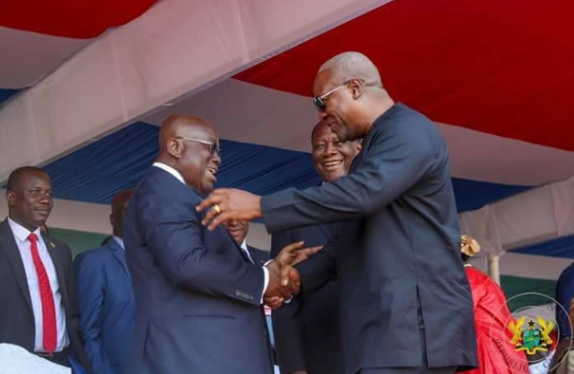 The Flagbearer of the opposition National Democratic Congress (NDC), Former President John Dramani Mahama has challenged President Akufo-Addo to a debate on the records of their respective governments in the area of infrastructure.

Addressing residents of the Ketu-South District as part of a four-day tour of the Volta Region yesterday, Mr Mahama said a debate would bring a conclusion to the matter.

Listen to the audio below;

“Today, I can see a scramble to grab even KVIPs and any infrastructure and tout it as an achievement. But it is easy to settle the issue of infrastructure. After all, the President says this election is going to be an election of track records, comparing his track record to my track record.

“We can settle it easily, lets have a debate between two of us, the two Presidents. Let Nana Akufo-Addo come and sit down, let me sit down and let’s debate our records. I am willing to present myself for debate, any day, anytime, anywhere and we will settle the matter once and for all”.

According to Dr Bawumia, the cost of projects undertaken by the Mahama government, on a comparative value for money analysis, appear to be quite outrageous.

For instance, the Vice President said while the NPP government is constructing four major interchanges; Tema, Pokuase, Tamale and Obetsebi Lamptey interchanges at a cost of $289m, the Mahama administration built the Kwame Nkrumah interchange alone at a cost of $260m.

For the Pokuase interchange, which he said is 75% complete, Dr Bawumia explained that the loan agreement for the project was signed in November 2016 for a three-tier interchange, but the Akufo-Addo government renegotiated for a four-tier interchange without any increase in cost.