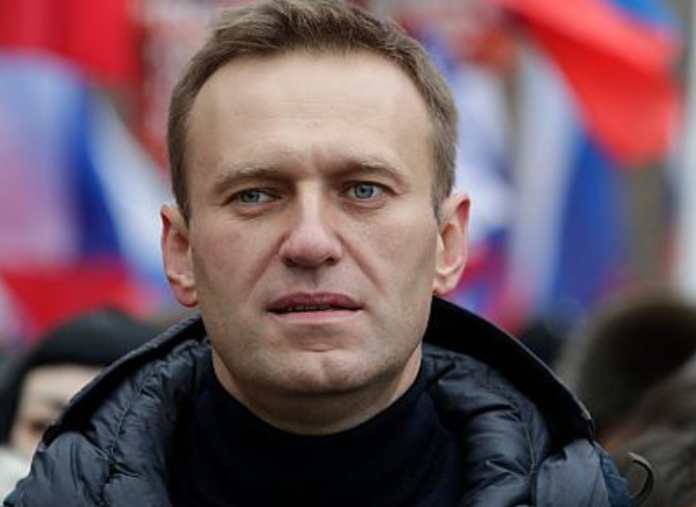 The anti-corruption campaigner fell ill during a flight and the plane made an emergency landing in Omsk, where doctors said he was in a coma and they were trying to save his life.

His team suspects something was put in his tea at an airport cafe.

The Kremlin said that it wished Mr Navalny a “speedy recovery”.

Mr Navalny, 44, has for years been among President Vladimir Putin’s staunchest critics.

In June, he described a vote on constitutional reforms as a “coup” and a “violation of the constitution”. The reforms allow Mr Putin to serve another two terms in office, after the four terms he has already had.

British Foreign Secretary Dominic Raab said he was “deeply concerned” by the reports Mr Navalny had been poisoned and sent his thoughts to him and his family.

What has the spokeswoman said?

Kira Yarmysh, the press secretary for the Anti-Corruption Foundation, which Mr Navalny founded in 2011, tweeted: “This morning Navalny was returning to Moscow from Tomsk.

“During the flight, he felt ill. The plane made an urgent landing in Omsk. Alexei has toxic poisoning.”

She added: “We suspect that Alexei was poisoned by something mixed into [his] tea. It was the only thing he drank since morning.

“Doctors are saying that the toxic agent absorbed faster through the hot liquid. Right now Alexei is unconscious.”

Ms Yarmysh said later that Mr Navalny was on a ventilator and in a coma, and that the hospital was now full of police officers. All of his belongings were being confiscated, she added.

She also said that doctors were initially ready to share any information but then they later claimed the toxicology tests had been delayed and were “clearly playing for time, and not saying what they know”.

Diagnosis would be “towards evening”, she was told.

Both Mr Navalny’s wife, Yulia Navalnaya, and doctor, Anastasia Vasilyeva, have arrived at the hospital.

Mrs Navalnaya was initially denied access to her husband because authorities said the patient had not agreed to the visit, Ms Yarmysh said, although she was later allowed on to the ward.

Dr Vasilyeva said they were seeking to transfer the opposition leader to a specialist poison control centre in Europe, but hospital doctors were refusing to provide records of his condition.

What are the other reports from the scene?

However, the deputy head physician of the hospital later told media that it was not certain Mr Navalny had been poisoned, although poisoning was “naturally” one of the diagnoses being considered.

Anatoly Kalinichenko said that doctors were “genuinely trying to save [Mr Navalny’s] life”.

Kremlin spokesman Dmitry Peskov later said it wished the critic a speedy recovery – as it would all citizens in such circumstances – and that the authorities would consider approving treatment abroad if it were requested.

Video footage on social media shows Mr Navalny being taken on a stretcher to an ambulance on the airport runway.

Another disturbing video appears to show a stricken Mr Navalny in pain on the flight.

Passenger Pavel Lebedev said: “At the start of the flight he went to the toilet and didn’t come back. He started feeling really sick. They struggled to bring him round and he was screaming in pain.”

Another photograph on social media purports to show Mr Navalny drinking from a cup at a Tomsk airport cafe.

The Interfax agency said the cafe owners were checking CCTV to see if it could provide any evidence.

Who is Alexei Navalny?

He made a name for himself by exposing official corruption, labelling Mr Putin’s United Russia as “the party of crooks and thieves”, and has served several jail terms.

In 2011 he was arrested and imprisoned for 15 days following protests over vote-rigging by Mr Putin’s United Russia party in parliamentary elections.

Mr Navalny was briefly jailed in July 2013 on embezzlement charges but denounced the sentence as political.

He attempted to stand in the 2018 presidential race but was barred because of previous fraud convictions in a case he again said was politically motivated.

Mr Navalny was also given a 30-day jail term in July 2019 after calling for unauthorised protests.

He was taken ill during that jail sentence. Doctors diagnosed him with “contact dermatitis” but he said he had never had any acute allergic reactions and his own doctor suggested he might have been exposed to “some toxic agent”. Mr Navalny also said he thought he may have been poisoned.

Mr Navalny also suffered a serious chemical burn to his right eye in 2017 when he was assaulted with green, antiseptic dye.

Last year his Anti-Corruption Foundation was officially declared a “foreign agent”, enabling the authorities to subject it to more checks.

George Floyd was positive for coronavirus but not cause of his death, autopsy reveals

Breaking: You’ve Got To Arrest, Track And Jail The Protesters For Ten Years And You’ll Never See This Stuff Again-Trump