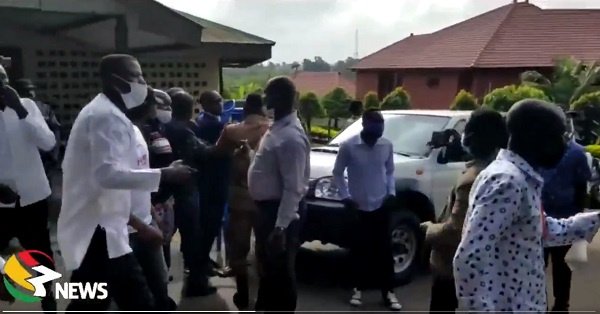 In a live report monitored by GhanaWeb, the Ashanti Regional correspondent of Despite Media Group, Sampson k. Nyamekye has reported that voting was briefly disrupted at the Bantama Cultural Centre when an agent sought to prevent a delegate from casting his ballot.

According to the report, the agent representing current Member of Parliament for the Constituency, Daniel Okyem Aboagye prevented the Constituency Treasurer from voting on the grounds that his status as an official of the Foreign Affairs ministry does not qualify him to vote, even though his name was found in the album being used for the election.

He adds that the situation led to a scuffle that witnessed some blows and slaps being dished out at the polling station.

The reporter, however, indicated that security personnel in the constituency were quick to resolve the situation which could have escalated allowing the treasurer to finally cast his ballot.

Speaking on the situation, former Member of Parliament of the Constituency, Henry Kwabena Kokofu in an interview with the Peace FM reporter alleged that some ‘macho men’ whose presence around the polling station seems to be intimidating delegates is the machination of the current member of parliament.

Mr okyem Aboagye is facing stiff competition from Deputy Chief of Staff, Francis Asenso Boakye in the competition for the party’s parliamentary candidature in the upcoming December general elections.

The New Patriotic Party is today, June 20, 2020 holding parliamentary primaries in some 101 constituencies across the country. Polls opened at 7:00 am and is expected to close at 1:00 pm.