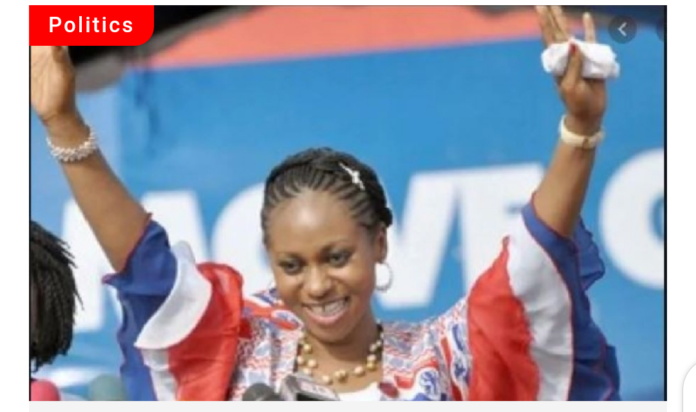 0
Read Time:1 Minute, 35 Second
Incumbent MP for Dome Kwabenya, Sarah Adwoa Safo, has beaten Ghana’s High Commissioner to India, Mike Oquaye Jr. in the New Patriotic Party’s 2020 parliamentary polls.The victory paves the way for the Minister or Procurement to have a go at retaining her seat in the 2020 general elections.

She told the media, “It is God who crowns kings”, adding: “It means everything to me”.

She said her victory “means that the people want a continuation of my good services”.

“We’ll continue the roads, schools, markets, health centres. This is evident of the fact that the people really want a continuation of those projects”, she said.

She noted that Mr Oquaye Jr. has called “to congratulate me and we are going to work together”.

Prior to the election, the competition between Mr Oquaye Jr., a son of Ghana’s Speaker of Parliament; and Adwoa Safo, who is also the Deputy Majority Leader, was very heated, a situation which prompted a strong warning from the President to the both of them.

President Nana Addo Dankwa Akufo-Addo threatened not to include either of them in his future government if the two cause any confusion in the Dome Kwabenya constituency during the polls.

This was disclosed by Mr Oquaye Jr. at a durbar with party supporters.

Speaking to delegates at his constituency a few days ago, Mr Oquaye Jr. said: “This is from the President of the Republic of Ghana. Today, Adwoa Safo and I met him and the President said he doesn’t want any confusion between us, or any division at Dome Kwabenya.

He said between today and the time of the elections, I, Mike Oquaye Jr. and Sarah Adwoa Safo, whoever causes trouble in the constituency, he will advise himself and we will not be part of his future government.”