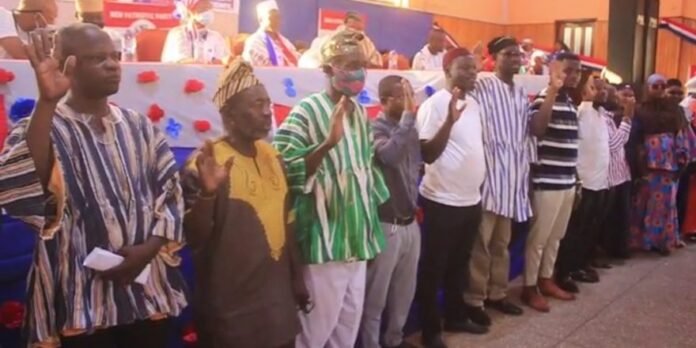 The New Patriotic Party (NPP) in the Tamale North Constituency of the Northern Region has inaugurated it’s 2020 campaign team members.

The campaign team is made up of thirty (36) members, including the constituency executives and some appointed party loyalists.

The Chief Executive of the Sagnarigu Municipality, Hajia Mariam Iddrisu who served as Chairperson for the occasion made a passionate appeal to Ghanaians to give the Akufo-Addo government another term following its remarkable records.

Check This out: NDC is pursuing God’s will to save Ghana- Naana Opoku Agyeman

She urged youth groups and supporters of the party to join the campaign team for an in-house campaign at their various communities.

According to her, the developmental projects and programmes being implemented by the NPP government is unprecedented.

Hon Alhassan Dahamani, parliamentary candidate for the constituency in an address charged the campaign team members to draft a solid plan, which will help the party unseat the incumbent member of Parliament of the area.

He advised them to have a formidable front and work to the satisfaction of the party ahead of the 7th December election’s.

According to him, the victory for the governing NPP is non-negotiable come 7th December.

The Communications Director for the Tamale North constituency, Mr Alhassan Baba admonished electorates of the constituency to rally behind the NPP and its parliamentary candidate because the John Mahama led administration did nothing for the area.