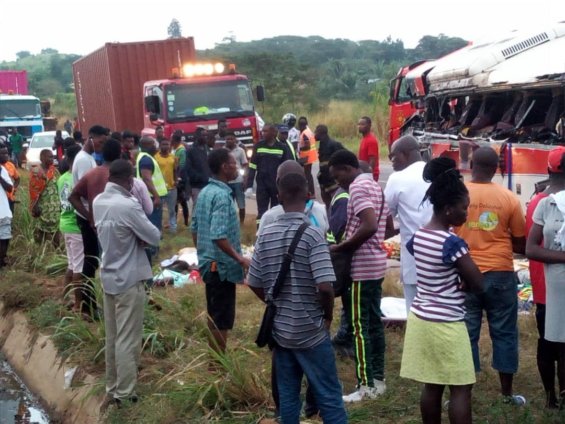 Some 14 passengers are feared dead after a cargo truck crashed into two buses at the Kyekyewere Community stretch of the Accra to Kumasi Highway.

Over 50 other passengers are said to be injured in the accident which occurred around 5:30 am, Tuesday.

According to eyewitnesses, a DAF Cargo Truck believed to be heading towards neighbouring Burkina Faso, burst a tyre; causing the driver to lose control of the steering wheel.

The vehicle subsequently veered off its lane and crashed into the two buses fully loaded with passengers from Kumasi to Accra.

Personnel from the Ghana Police Service and the National Disaster Management Organisation (NADMO) were called to the scene to help control the situation.

Sources say some of the victims involved in the accident have been sent to the Nsawam and Suhum Government Hospitals.

The bodies laying on the ground beside the vehicles have also been conveyed to the morgue.

Speaking to JoyNews, a NADMO staff, Kwadwo Minta said the team has succeeded in rescuing all passengers who were trapped in the vehicle.

“We got a distress call from an eyewitness, so the NADMO team mobilised with the police and rushed to the scene.

Check This Out: Mobile phone users to enjoy 4% reduction in voice, data charges from Sept. 15

“When we got here, there were about 10 bodies and we couldn’t even tell which head belongs to which body.

“The bodies that we counted at the scene were ten, then the NADMO chief had a call from the hospital that one more person had passed on,” he said.

“It is fair to say the STC and KIA bus were both fully loaded considering the numbers of passengers,” he added.

Meanwhile, in an update on the situation, the Ayensuano District Police Commander, ASP Francis Kwadwo Nartey said the death toll now stands at 14.

According to him, two of the fatalities came from the STC bus while the other 12 were from the KIA bus.