Home Geneal News I’m humbled to be selected for the fourth time as running mate... 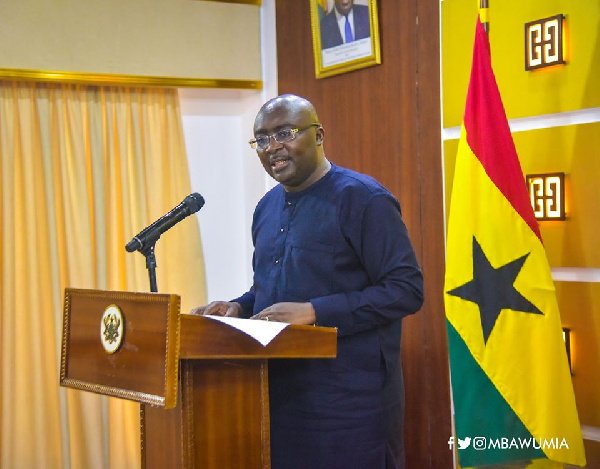 Vice President Mahamudu Bawumia, Saturday expressed his profound gratitude to President Nana Addo Dankwa Akufo-Addo for choosing him for the fourth time as his running mate for the 2020 general elections.

He also thanked the members of the National Executive Committee and National Council for overwhelmingly endorsing his nomination.

Dr Bawumia, speaking at the acclamation of President Akufo-Addo as the NPP’s Presidential Candidate for this year’s election, at Alisa Hotel, Accra, pledged his readiness to serve and work to the best of his abilities to retain the President and NPP in power in the December 7 Election.

“I’m most honoured and privileged that I have been chosen by the President to serve once again as his running mate.

“It is important to note that my job as running mate is to support the President in implementing his vision.

“The best running mate in the world will not make a difference if the President is indecisive or incompetent.

“I’m thankful that in President Nana Addo Dankwa Akufo-Addo, I have strong, decisive, incorruptible and competent President to work for,” Dr Bawumia stated.

“I wholeheartedly and with humility accept the nomination and am ready and prepared to serve.

“Sir, it has been a privilege and honour working for you, and I thank you for giving me the opportunity, God bless you,” Dr Bawumia added.

Vice President Bawumia took the opportunity to thank the members of the NPP from the polling station through constituency, regional and national level for the love they had shown towards him.

Dr Bawumia was first selected in 2008 and re-nominated in 2012, 2016 and once again 2020, making him the only person to have partnered a presidential candidate the most number of times in the history of the nation.

The acclamation ceremony was attended by former President J.A. Kufuor, National Chairman of the NPP Freddy Blay, and members of the Council of State, Ministers of State, as well as some national, regional and constituency executives of the Party.