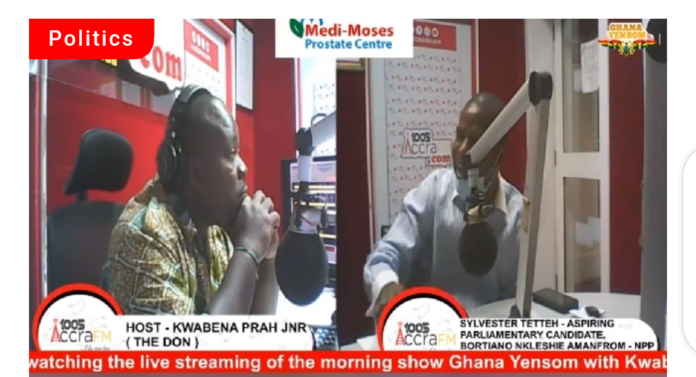 0
Read Time:1 Minute, 31 Second
Mr Sly Tetteh, the New Patriotic Party’s parliamentary candidate for Bortianor Ngleshie Amanfrom has said he sees nothing wrong with his private car being used to convey registration materials of the Electoral Commission to registration centres, as part of the voter ID card registration exercise.

He told Kwabena Prah Jnr (The Don) on the Ghana Yensom show on Accra 100.5FM on Tuesday, 30 June 2020 that all the political parties are expected to help the EC carry out the exercise hence, he cannot be faulted for making his car available to the EC to convey its materials.

The opposition National Democratic Congress’ parliamentary candidate for the same constituency, Mr Alexander Ackuoko, raised a protest against the development at the registration centre.

Mr Ackuoko told Kwabena Prah on the same show that the EC had indicated that it was well prepared for the exercise.

“While I was going round, I saw an NPP-branded Pickup rat one of the centres and they said they carried the EC’s logistics to the centre but I said: ‘No. It cannot be done’. This is the work of the EC, the EC has said they are fully prepared for the exercise and, so, NPP’s car cannot be the one to be bringing logistics and materials to the centres. This is not right,” he told The Don.

But Mr Tetteh, who is also the CEO of the National Youth Authority (NYA), said: “I am not even aware that my car is being used because I had just woken up from bed. I went round all the centres in the constituency and, so, I slept very late last night. But I see nothing wrong if my car is being used. As political parties, we can help the EC to carry out its work.”