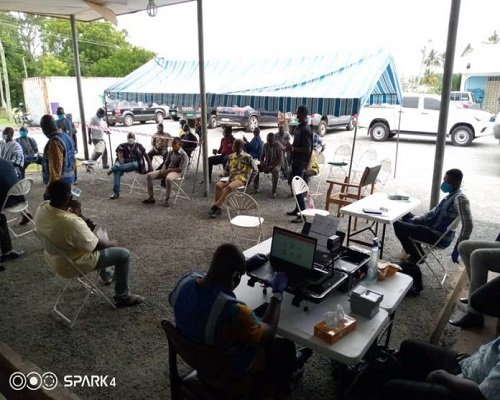 Information reaching reportghana.com indicates that an official of the Electoral Commission (EC) at the Akotsi Polling Station at Gomoa in the Central region has confiscated the cell phone of a reporter with the Multimedia Group Limited.

According to the Adom FM reporter, Seth Ankomah Adjei, the EC official pushed him and forcefully took his mobile phone for taking a video of agitations between registrants and one individual believed to be demanding monies from some registrants to skip the queue and quickly get registered.

He noted that the EC official took his cell phone despite telling him he was a reporter with the Multimedia Group.

His phone he says, after being seized for several hours has been given back to him.

The EC official, according to him, is a headmaster of a school in the area.

Reports by the Adom FM reporter indicated that the EC official appeared not to care about the activities of the unidentified man said to be taking monies from some of the registrants to jump the long queue.