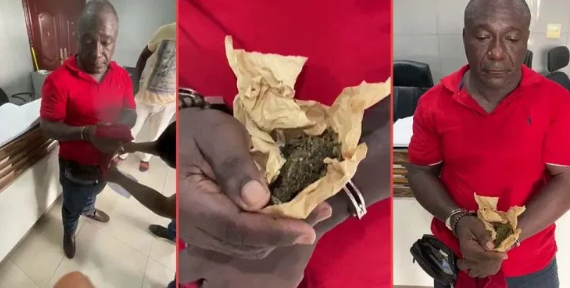 A drug test conducted on Kwabena Owusu Adjei, the self-styled pastor who was arrested for allegedly threatening Jean Mensa, the Chairperson of the Electoral Commission has tested positive for tramadol and cannabis.

A medical report, sighted by Citi News from the Police Hospital showed that his urine sample was taken and tested for some banned substances on Tuesday, June 9, 2020.

He tested negative for six of the drugs, except cannabis and Tramadol.

The embattled General Overseer of the Hezekiah Prayer Ministries was arrested on Tuesday during a live interview he was having with Hot FM at a ‘secret location’ in Accra.

The interview was based on some statements he had made a few days earlier concerning the Chairperson of the Electoral Commission and President Nana Akufo-Addo bordering on the compilation of a new voters’ register and the death of former Abuakwa North MP, J.B. Danquah-Adu.

The pastor reportedly warned Jean Mensa to stop the compilation of the new register or risk being killed.

Many people called for his arrest following the statement which they claimed were threats on the EC boss’ life.

A group called Okyeman Youth For Development in the Eastern Region called on the National Security to sanction the pastor for threatening the EC boss.

After being picked up on what some opposition members described as harsh and illegal manner, photos and videos later emerged from within the country’s security apparatus that cannabis was found on him.

Owusu Adjei was slapped with three charges; threats of death, offensive conducive to the breach of peace and possession of narcotic drugs.

He was immediately arraigned and was remanded by an Accra Circuit Court to reappear on June 23, 2020.