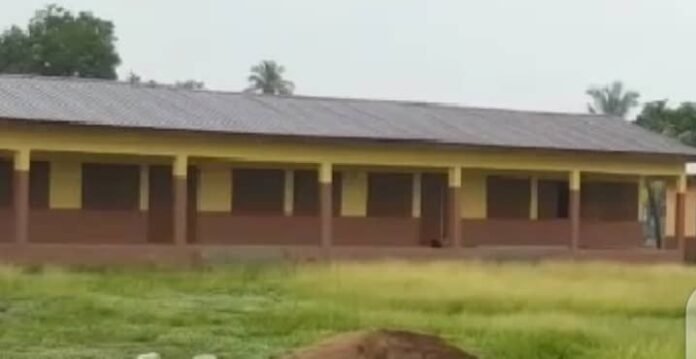 The Adaklu District Assembly has begun the expansion of the school infrastructure ahead of the re-opening of schools to contain the growing number of pupils and students in the various schools across the district.

Currently, the Gbekor senior high school, one of Mahama’s Community Day schools is undergoing a number of expansion works, including a 600 capacity boys dormitory and another 500 capacity girls dormitory facility, which are due for completion by the end of June.

The new dormitories according to the DCE for Adaklu, Phanuel Kade Donkor is line with a decision to convert the school into a boarding status in anticipation of the September 2020 admissions under government’s Free Senior High School policy.

He said, “in actual fact, we inherited this project from the previous administration but we thought it wise to add a boarding facility; and so, we are doing this through a support from the government of Ghana, Getfund and the District Assembly.

He added that, “we are doing this in anticipation for the arrival of the September admission of students under government’s Free SHS policy.”

The Gbekor senior high school, formerly known as Adaklu-Aboadi-Trefe senior high school currently has a little over 100 students but that number is expected to shoot up in the coming years starting from September this year.

In addition, the District Assembly has began the distribution of some 508 dual desk to selected schools across the district to improve upon the teaching and learning activities in the schools.

Presenting the desks, the District Chief Executive said, “Education is one of government’s topmost priorities and it is in line with this agenda that the Assembly was compelled to invest the total grant of GH₵ 127,079.00 into education, following our qualification under the District Performance Appraisal Tool 2016 (DPAT I).”

He said the 508 desks which would seat 1016 pupils is just a first step to addressing the over 5000 furniture deficit in schools.

He hinted that another badge of 600 dual desks would be provided by October, 2020 beside mono desks and kindergarten furniture.

Receiving the desks on behalf of the Education Directorate and schools on Wednesday, 10 June, 2020 the District Director of Education, Mr. Francis Yao Agbemadi was grateful for the immense and continuous
support the directorate is enjoying from the Assembly, while adding that, “furniture plays an important role in efficient and effective teaching and learning.”

He stated that the desks would be immediately distributed to the eleven schools earmarked for the distribution.

He assured that the directorate would work with heads of the receiving schools to ensure that the furniture is well maintained.

Meanwhile, the District Assembly has completed a six-unit classroom block facility for the Adaklu Waya EP Primary school to reduce the growing congestion in the existing classrooms.

Currently, the old classroom blocks accommodate 70 pupils against its capacity of 40 pupils but the new classroom block has come in hand to help decongest the classes.

Mr. Phanuel Donkor Kadey indicated he was glad that a lot of effort was being made to improve education delivery particularly in the area of infrastructure among many other
projects which are ongoing within the district including another 6-Unit classroom blocks at Adaklu Anfoe.

Though basic schools remain shut amidst the Covid-19 pandemic, the provision of adequate infrastructure remains the topmost priority of the Adaklu District.