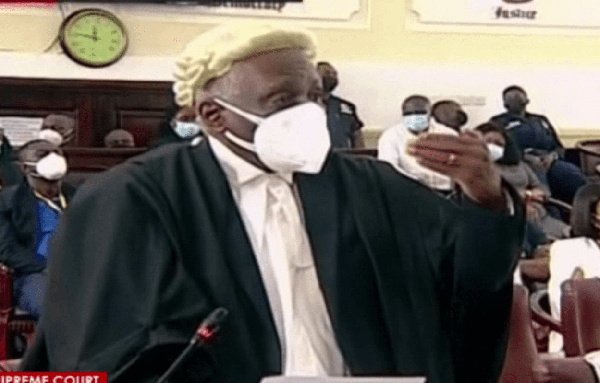 Exchanges between lead counsel for the petitioner in the 2020 Presidential Election Petition hearing, Lawyer Tsatsu Tsikata, and some justices on the bench hearing the petition in Supreme Court bench, escalated to a point where Tsikata had to demand to answer a question at a time.

Mr. Tsikata was arguing his case as to why the 1st and 2nd Respondents cannot close their cases without further adducing evidence as they moved motions to do on Monday, February 8.

Lawyers for the 1st and 2nd Respondents on Monday moved motions to close their cases without calling further witnesses after the petitioner had close his close following the discharge of his 3rd witness.

Mr. Tsikata raised an objection against the applications and insisted the chair of the 1st Respondent EC must enter the witness box and be cross-examined.

The court fixed Tuesday for all parties to advanced their legal arguments for the court to decide on.

However, there was a dramatic encounter when Mr. Tsikata took his turn to make his arguments.

Counsel for the Petitioner held that inasmuch as Justice Apau had the legal leeway to seek further clarification from the witness, personal opinions cannot be part.

Justice Apau, however, pointed out that he only wanted to understand the issues better hence the questioning, and sought to find out from Mr Tsikata in what way his questioning was harassment of the witness.

In furtherance of the same issue more of the judges asked the witness why both agents of the Petitioner should leave the EC’s strong room.

They further wanted to ascertain whether Dr Kpessa Whyte had any training before taking up the responsibility as the Petitioner’s agent in the EC strong room and whether they, as agents, were to take instructions from the EC Boss.

For most parts of his arguments, members of the bench interjected either to seek clarity or to draw his attention to something he may have overlooked.

It got to a point where Mr Tsikata was answering a question posed to him by one of the Justices. While at it, another Justice asked him another question. A seemly incensed Tsikata demanded he is allowed to answer one question at a time.

“Please, can I answer to you one at a time!”, he demanded.

He then proceeded to make his arguments insisting the EC chair must enter the witness box to testify to her witness statement that she signed.

Renowned personalities who have died from Coronavirus within a month