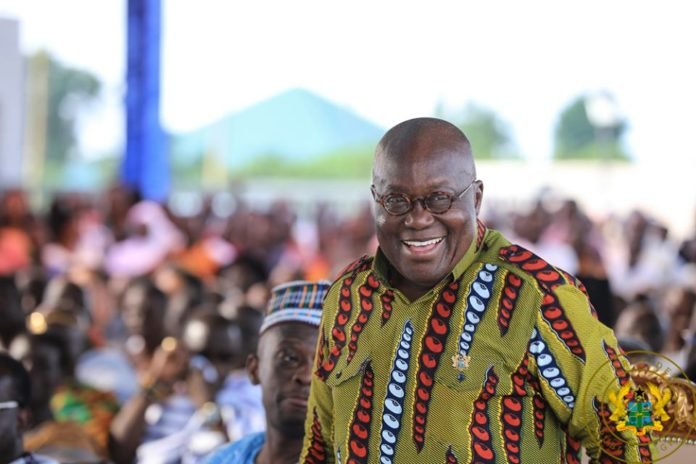 0
Read Time:4 Minute, 12 Second
President Nana Akufo-Addo has described claims by the Mahama administration that it undertook unprecedented infrastructural development, including roads, as a mere fantasy that was contained in the Green Book of the National Democratic Congress (NDC).

“We made a pledge to the Ghanaian people to expand and improve the road network while closing the missing links in the network. We had to make this pledge because we know that the so-called unprecedented infrastructure development of the Mahama administration was fantasy; existing in the Green Book and not on the ground,” President Akufo-Addo said when he inaugurated the $57-million Tema Motorway Interchange project that is being financed by the government of Japan through the Japanese International Cooperation Agreement (JICA).

“We know that the provision of quality road infrastructure is an important tool for the socio-economic development of our country and government will ensure the even spread of such projects across the country”, the President said, adding: “That is why we are determined to complete major road projects like the Pokuase Interchange, the Eastern Corridor Roads, the Bolgatanga-Pulimakum road, the Tamale Interchange, the Tema-Bomaa road, Obuasi town roads, the Atebubu-Kwame Danso road, the Twifo Praso-Assin Fosu road, LEKMA road, Suhum-Asamankese road …”

“The government has secured funding for them and virtually all of them are going to be completed before the end of this year”, he promised.

The President also said the completion of the Tema Motorway Interchange will bring immense economic benefits to Ghana.

“Government is committed to the successful completion of all projects and I urge the Ministry of Roads and Highways to see to their expeditious completion”.

“As we talk about the upgraded conditions of our highways, we, as Ghanaians, need to be mindful of our responsibilities in the use of our roads”, President Akufo-Addo said.

He noted that: “Although the necessary safeguards have been put in place, the severity and frequency of accidents on our highways due to over-speeding and indiscipline are a great reproach to all of us”.

“Motorists must be extra careful and disciplined on the highways and resist the temptation of over speeding. Better roads should be a catalyst for national development and not instruments of death and pain”.

“Let us use this superior road network responsibly and productively”, President Akufo-Addo added.

The Minister for Roads and Highways, Kwasi Amoako-Attah, in his statement, charged the Ghana Highway Authority (GHA) to ensure that all the ancillary works required under the first phase of the project are undertaken for the successful take-off of the second phase.

“I urge Heads of MMDA’S within the project catchment area to ensure that indiscriminate erection of bill boards, pasting of posters on footbridges, kerbs etc., are avoided. Planting of trees should be embarked upon to protect the environment from exhaust pollution”, the Minister said.

The Tema Motorway Roundabout was a 5-leg roundabout where traffic from Accra and Tema Pot, Akosombo, Aflao and Tema Community 9 converge, causing heavy traffic congestion during the rush hours. The congestion at the roundabout became an impediment to smooth and sate movement of people and goods which adversely affected productivity and economic activities, especially in the environs of the Industrial City of Tema.

The increase in the volume of cargo at the port after the completion of the expansion works also contributed to the significant increase of truck traffic at the roundabout.

In compliance with the National Transport Policy of expanding and upgrading the international corridors to achieve integrated, efficient, and sustainable transport system and help achieve the objective of the transport hub of the West African sub region, the Government of Ghana (GOG) in 2013 made a request to the Government of Japan (GOJ) for a Grant Aid Assistance to implement “The Preparatory Survey for the Project for the Improvement of the Tema Motorway Roundabout”.

In March 2017, the Exchange of notes/ Grant agreement for the survey and design under the Project name “The Project for Improvement of Ghanaian International Corridors (Grade Separation of Tema Intersection in Tema) was signed.

It is expected that the opening of the roads to motorists will greatly improve the capacity of the Tema intersection as well as enhance safety and efficiency of the transport and freight. It will also provide uninterrupted traffic flow to facilitate trade and transit in the West African Sub-Region, contribute to the economic development of Tema and its environs, and minimize the negative effect on the environment from vehicle emissions.

Project Cost and Executing Companies Messrs CTI Engineering International Co. Ltd was the supervising Consultant with the works executed by Messrs Shimizu-Dai Nippon JV. The project duration was 28 calendar months, that is, from 7th February 2018 to 6th June 2020. The project cost was about 57 million United States dollars.