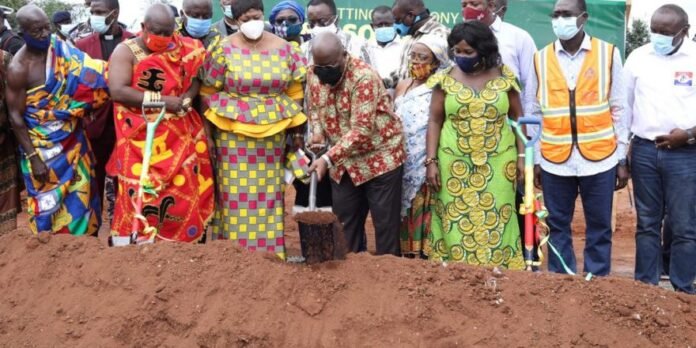 The President of Ghana, Nana Addo Dankwa Akufo-Addo, has cut sod for work to begin on a solid waste treatment facility in the Bono Region.

Financed by the Jospong Group with support from the Government, the project will be supervised by the Ministry of Sanitation and Water Resources.

Zoomlion Ghana Limited, in a bid to ensure the totality of proper waste management in Ghana, together with its partners will be constructing an ultramodern waste treatment facility in the Bono region.

These solid waste treatment facilities will be constructed in all the 16 regions across the country.

In an interview with the Dwantoah hemaa of the Sunyani traditional area Nana Aboah Boahemah, she indicated that the solid waste facility has come at the right time to assist both the traditional area and the government in making the Bono Region regain it’s lost Sanitation Glory.

“We thank the Jospong Group especially its Chief Executive officer for thinking about us. It will reduce waste occupying.

Sunyani township will claim it’s old name. It will create jobs for the youth and will also reduce the Sanitation issues in the area and called on the other investors to emulate the steps of Dr. Joseph Siaw Agyepong and the Jospong Group” Nana Aboaa Boahemah added.

Speaking on behalf of the Paramount Chief of Sunyani traditional area, Oboaman Bofotia Boamponseo II, Krotinhene of the sunyaniman traditional area commended the Jospong Group for their selfless efforts in making Sanitation in the country becomes a priority in the Bono Region and the nation as a whole.

“The youth of Sunyani and it’s environment must be considered first in terms of employment and I know Dr. Joseph Siaw Agyepong and his group will take this in good fate”.

“Let me plead with the Jospong Group and the government not to make the project a white elephant project but rather make sure it is completed in time”. This facility will motivate the natives of Sunyani to maintain personal hygiene and keep the environment clean as cleanliess is next is to Godliness”. Nana Bofotia added

Hon. Cecilia Abena Dapaah on her part indicated that the government was committed to ensuring a clean and healthier Ghana by engaging in strategic partnerships such as this. She said that due to the large amounts of waste generated daily across the country, facilities such as these are important developments that will help address waste management problems.

She also revealed that Ghana was well on her way to achieving the 2030 sustainable development goals in water and sanitation due to the aggressive initiatives being advanced by the government in partnership with the private sector.

She took the opportunity to call on private companies with similar visions to come onboard to advance the Sanitation problems confronting the nation. “Government is ready to support any private company whose visions align with governments Sanitation vision’ , she added.

The Bono Regional Minister Hon. Evelyn Kumi Richardson in her address expressed her gratitude to the government and the Jospong Group for their efforts to make sure the Sunyani city goes back to it’s old name.

“The people of Bono Region are grateful to President Nana Akufo-Addo because he has made our dream a reality. Hon. Cecilia Abena Dapaah Sunyaniman will forever remember you in the efforts you put together in ensuring the solid waste treatment Facility constructed here and on behalf of the indigenes in the Bono Region we say ayekoo”. Hon. Evelyn Richardson said.

President Nana Akufo-Addo together with some other government officials will go to Ahafo Regional capital Goaso to cut sod for the construction of another solid waste treatment Facility later in the week.