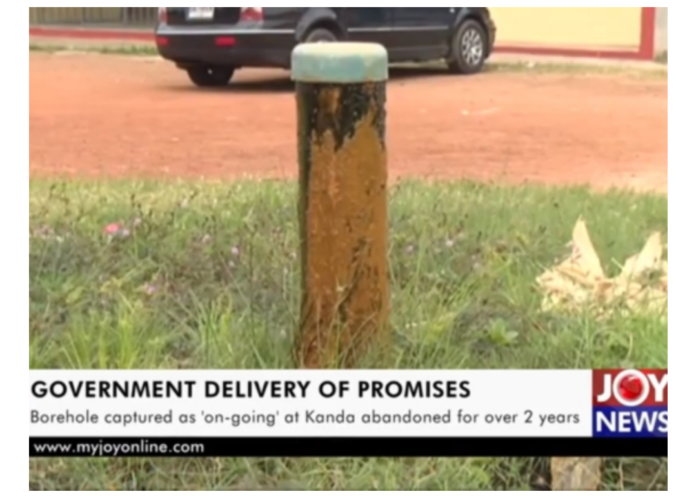 A borehole project captured as an ongoing project under the Akufo-Addo government at Kanda has been left abandoned for over two years.

Vice-President Dr Mahamudu Bawumia in a presentation on the administration’s infrastructural achievements since it assumed office in 2017 has generated reactions from across the country from Ghanaians resident in the communities where the projects are said to be sited.

The Vice President in what he described as a data-driven presentation on Tuesday, pointed to over 17,000 projects dotted across the country.

He insisted that his government has undertaken more projects in its first tenure than what was provided by the opposition National Democratic Congress (NDC) in its eight years in office.

From industrialisation to collaboration with the private sector, Dr Bawumia said government has been focusing on value for money and chose to not only focus on grand projects but initiatives that will touch every part of the country.

However, checking out some projects listed, it revealed that not all of them are as stated. At least not on the ground.

One of the projects which were inconsistent with the statement of the Vice President is the delivery of borehole at Kanda in the Ayawaso East Municipality.

Joy New checks revealed that the project has been abandoned and the residents say they go through a lot of hardship to get potable water.