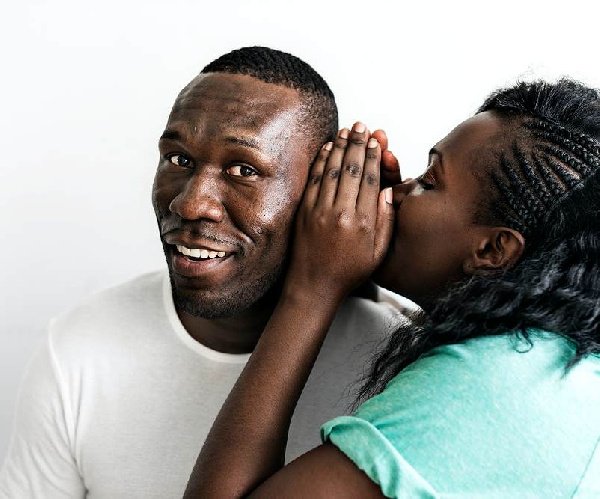 When my husband was my boyfriend, he made it very clear that he was going to take care of me. I wasn’t working. He was working in the mines and was able to afford a certain lifestyle. I had completed school afresh and was doing my service in the mines. That was where we met.

After my service, I wasn’t made permanent staff so I had to come home and start looking for a job. During those hard times, Ebo was there for me, giving me some amount every month and buying gifts as and when he could.

I didn’t sit on my back. I wrote a lot of letters applying for jobs. I sent my CVs around looking for jobs that did not exist—jobs that I was even overqualified for. No one will give me a job. I stayed home for over a year and a half without a job but Ebo kept providing and ensured I didn’t need anything.

Sometimes, he even sent money to my parents when I wasn’t aware. One night while spending the weekend at his end, he said, “Let’s get married.” I said, “Yeah, after I’d found a job. I should get my life in shape before.” He responded, “There are more days after marriage. You still can look for a job and land a job. Forget about job now and let’s settle down.”

We had dated for three years when he suggested we should marry. When I discussed it with my parents, they agreed. They didn’t care that I didn’t have a job. They said, “Job search is an everyday thing. Marriage comes around once in a while. Grab it now and search for a job tomorrow.”

So in August 2014, we got married. A week after our honeymoon, I packed all that I had, which were mostly clothes, and went to live with my husband. People say marriage comes with certain blessings because people who tie the knot in the presence of God find favors with God. Just one month after marriage, I found a job that paid me well enough to put my life in balance.

You would expect that my husband would leave some of the financial burdens on me to cater for them but no. He did everything. When I said everything, I mean even toilet rolls, he didn’t allow me to buy them with my money. He said, “You started making money not too long ago. Save. Invest.

Someday, it would come in handy. What’s an investment if I can’t invest in my own marriage? But this guy didn’t allow it. Yeah sometimes I succeeded in buying foodstuffs and other groceries for the house but I wanted to do more, I wanted to feel part and parcel of the running of the home. I felt like my opinions would matter more if I assisted financially but he didn’t allow it.

We had our first child a year later and when our first child was only nine months old, I got pregnant again and gave birth. The third child came a year after the second. Responsibilities shot up. We needed more financial power. It was during that time my husband left the mines and got a new job that wasn’t paying any better.

He had to leave the mines because the company he was working for lost their contract with the mines. He didn’t have money like he used to but he still wanted to carry all the financial burdens. Is it ego? Is it stupidity? Is it wrong upbringing? It might be a superhero syndrome. I can’t tell. You look at him and you see all is not well. He was stressed holding on to all the responsibilities, so I devised a way of helping out without letting him know.

I started by finding money in his pocket. Every time I washed his clothes, I called to tell him I’d found money in his pocket. You could see happiness lit up on his face instantly. He would ask, “Really, how much?” Before I could say how much, he would come and snatch the money from me and start counting it himself.

He needed support but stupid pride won’t allow him to ask that from his wife. I kept hiding money in his pockets and washing them so he could claim ownership without shame. It got to a point the money in the pocket thing became suspicious. So I’ll pay the utilities and tell him, “The light bill came. I didn’t want to disturb you so I picked money from your wallet and paid. He wouldn’t ask how and when, all he wanted to know was that it was he who paid the bill.

Paying rent was something he didn’t want me anywhere close to. He said, “A man provides a home for the family, and any man who can’t do that can’t call himself a man.” That year, things were knocking things. Life was hard.

I was patiently waiting for him to ask me for help. He didn’t. The landlord came around once. It hadn’t happened before that the landlord would come around asking us when we would pay rent. I knew he wasn’t going to ask for help so the next day, I looked for a vendor and sent him mobile money. The following day, I sent him another money through another vendor. When he came home in the night, he complained to me, “Someone had mistakenly sent me money on my phone.

It had happened twice already. I thought it was a mistake but till now, nobody had called to ask about the money.” I told him, “It happens. If it’s a mistake, the owner would call so don’t worry.”

Two days later, I sent someone to put money in his bank account. Surprisingly, he never told me about the bank account transaction. I was waiting to hear him say, “Can you imagine my bank account has money I don’t know where it came from?” We never had that discussion. It was that same day that he paid the rent. Men and pride. When I was young, I wondered why men often die before their wives.

I’ve learned not to wonder any longer. Because of my husband, I know why men die earlier. They don’t ask for help. They want to carry all the load until one day, they breakdown under the very load they thought they could carry without help. I’m on a mission. In 2021, if you hear the two of us fighting, it would be that I paid the rent and that sent the sword right through his heart. How long can I continue playing tricks just because I don’t want to hurt his ego? Once in a while, even magicians run out of tricks.

He’ll learn to accept my help because I’ve been raised to give help willingly, without any strings attached or without trying to usurp the authority of my man.