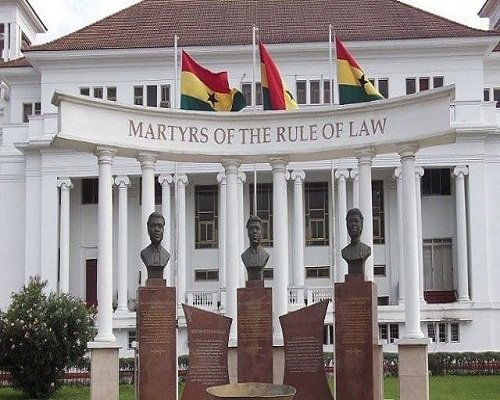 The Founder of the Diaspora Progressive Movement in USA , Dr Lawrence has said that Ghana’s Supreme Court judges must use the current Election cases brought before them as a yardstick to protect their integrity and to propagate a positive atmosphere that will convince Ghanaians to restore the hope they once had in the judicial system.

According to him, it was time for the supreme court to shine in the discharge of theyr duties.

Dr lawrence argued that One of the greatest challenges in Africa is how we conduct and declare our Presidential elections and results respectively.

According to him, It has become so corrupt that, it is normal that once a flawed and illegitimate President is declared a winner, the status quo is observed.

“This is why I called on the Supreme Court of Ghana to shine and overturn the status quo legally.” He said.

Read his statement below:

One of the most greatest challenges in Africa is how we conduct and declare our Presidential elections and results respectively. It has become so corrupt that, it is normal that once a flawed and illegitimate President is declared a winner, the status quo is observed. This is why I called on the Supreme Court of Ghana to shine and overturn the status quo legally.

As soon as the Presidential results were declared on December 9 2020, the NDC came out and rejected that flawed results. No wonder, the following day, EC Chair, Mrs Jean Mensah came out and changed the figures but maintained that the percentages didn’t change. It was very clear that the 51% for Nana Addo and 47% for John Mahama were plugged figures and Jean Mensah was looking for figures to match those percentages, regardless of the figures on the original pink sheets.

NDC is in court and what has motivated them to go to court is the constitutional powers given to the pink sheet to resolving election disputes. They are also motivated by the case of Kenya and Malawi, where the Supreme Court overturned the status quo and declared a run-off which were eventually won by the opposition leader.

Africa is crying for the time when Presidential elections are held free and fair and all who helped to cheat are jailed. Today, some African countries are hailing Kenya and Malawi and this is the time, the Supreme Court (SC) of Ghana joins them in finding a permanent solution to African electoral corruption.

I pray and hope that as the SC of Ghana strives to join Kenya and Malawi with the election petition before it, it should uphold the constitutional powers given to the pink sheet as the source document to resolving election disputes. Per their own admission, elections are won at the polling stations and the only legal evidence at the polling stations are the pink sheets.

As the SC hears the petition before it, it should base its judgment on law and remove all doubts that are surrounding the elections results. NPP’s Peter Mac Manu said on Joynews that John Mahama didn’t get the figure the EC mentioned for him. NDC has publicly come out to say, Nana Addo also didn’t get the figure the EC gave to him. The world is looking up to the SC to clear these doubts, and give Ghana a free and fair results.

As the SC listens to the petition, it should be guided by the fact that it’s integrity and respect are on the line. Africa is looking up to Ghana to join Kenya and Malawi to restore integrity in our judicial system. Africa is forever looking up to Ghana to restore the will of the people and jail the cheaters during Presidential elections. Kenya and Malawi took that bold step. Ghana can easily be the next country to do same. This is not a sophisticated call to the Justices of the Supreme Court.

As the SC listens to the petition before it, Ghana is considered the black star of Africa. This statement should not only be because of our independence but should also be because of our fair judicial system. This is why I say, it’s time for our Supreme Court to shine.
If the Supreme Court succeeds in joining Kenya and Malawi by restoring the will of the people, the pride of it will not only come to themselves, but to all Ghanaians, with me included. The world is watching.

Dr. Lawrence is the Founder of the Diaspora Progressive Movement in USA.